Breeding with your dog 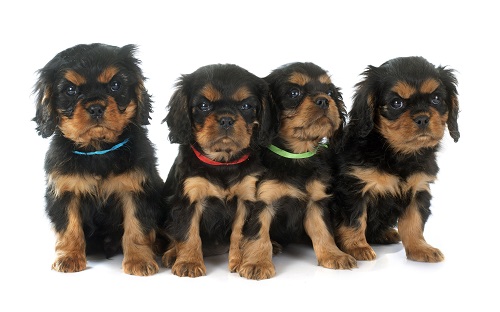 A female dog will only come into heat for the first time between the age of seven months and anytime up to a year of age. Occasionally this period may be longer. The age at which they first come into heat is governed by a combination of factors but usually smaller breeds start at a slightly younger age than the larger breeds. This is by no means a set rule as there is a great variation. Once she has started to cycle, a female dog will then come into heat every 4 to 7 months but your giant breed dogs may only cycle once every 12 to 18 months. It can take up to 2 years for them to develop regular cycles. Once started the heat cycle can last 2 to 3 weeks. There are two main parts to a female’s cycles namely pro-oestrous and oestrous. Pro-oestrous is the period during which her vulva will be very swollen, she may have a bloody discharge (volume varies greatly) and she will not allow any males to mount her. This is essentially the non-receptive part of her cycle. The second part is known as oestrous. At this point her vulva is still swollen, any bleeding has stopped and most importantly this is the period during which she is receptive to males and will allow mating. It is essential to understand this to avoid unwanted pregnancy. It is only when the bleeding stops that she is in full heat and at her most fertile.

Age at which to consider to start breeding

As mentioned before most females will start their cycle in the later part of their first year of life. It is not recommended to start breeding with a female on her first heat cycle. She is still young and her hormone cycles may not be completely regulated and she is still immature. Most females will come into heat again just before or after 2 years of age. Some breeders feel that breeding should only be done on her third cycle but provided she is full grown and healthy, starting on the second cycle may be considered. Keep in mind that occasionally these litters may be smaller. She can then be bred with until she stops cycling although, as with humans, the older a female the smaller the litter and the higher the risk of complications such as still births etc. It is recommended to stop breeding when they are about 7 years of age.

Finding a suitable mate for the female is important. The basics apply such as choosing the same or desired breed with which you want them to mate. The correct age of both the male and female is also important. Placing two inexperienced dogs together can have some undesirable consequences and it is usually recommended to mate an inexperienced dog with a more experienced older bitch or vice versa. The size difference between the male and female is especially important and one should never breed a large male to a small female as this may lead to oversized foetuses resulting in an inability for the female to give birth without assistance or severe consequences. This is very rarely a problem with dogs of a similar breed unless a very young female is bred to a larger older male. For factors such as breed standards and registration it would be best to contact the relative breed clubs for guidance and regulations.

Let us start with the basics; any breeding pair should be well grown, not too young or old (as mentioned previously), healthy and fully up to date with their vaccinations and deworming schedules. Your pair should have all their puppy vaccinations and have been vaccinated within the last 12 months. Tick and flea treatment should be up to date, to avoid any health concerns as well as transmission to the other dog. Often both animals should be tested and vaccinated for herpes virus as this can be a cause of death in new born pups. It is also recommended to avoid contact with other dogs to avoid possible transmission. One can also test for brucellosis although the causative agent has not yet been found in South Africa.

Deciding how to go about breeding

There are two main options for breeding, namely natural breeding and artificial insemination. With natural breeding there is very little you as a breeder need to do other than place the pair together and let nature take its course. The main thing is to place them together at the right time, when she is in full oetrus and receptive to male attention and allows mating. This, as mentioned earlier, will be the period after which she has stopped bleeding. It is also advisable to allow the pair to mate several times to ensure optimal conception. If time is a limiting factor then it is ideal for you to visit your veterinarian for oestrous monitoring, where using response to stimulus, vaginal cytology and appearance of the reproductive tract will help determine when a female is at her most fertile stage. For males one can do a breeding soundness examination. This is especially relevant in older dogs but also if there is any concern about his breeding soundness i.e. small litters, failure to conceive etc.

For artificial insemination it is imperative to do oestrous monitoring as one will only have a limited amount of time and fertile semen to work with. The advantage of this technique is that semen evaluation forms part of the process to determine whether there are sufficient normal motile sperm for insemination and fertilisation to take place. The whole process is strictly monitored and performed by a veterinarian. This process is normally reserved for animals with either breeding issues or time limitations of the breeding pair coming together.

Caring for the puppies for the first 6 to 8 weeks

It is important to prepare an area for the female to whelp (give birth). This should be an area separated from any other dogs and it should provide an area where the puppies can be kept warm but where the mother can move away to a cooler part if she needs to. She should have fresh water and food available at all times. It is advisable to start feeding the mother puppy food (small and medium breed puppy food only) in her last trimester of pregnancy and especially during lactation (where her energy requirement to feed her pups by producing enough milk increases significantly). To ensure the pups are eating enough and growing well it is a good idea to weigh them several times and record the weights during the first 2 weeks. It is important to deworm the mother and puppies starting at two weeks of age and then every two weeks until the puppies are eight weeks old. Consult your veterinarian for when dewormers are suitable at what age. All puppies should be vaccinated at 6 weeks of age, before they are sent to a new home. All puppies should be taken to a vet for a health check, vaccinations and deworming. Before sending a puppy to a new home be sure that the new owners are given advice of what to feed their puppies. A well formulated and balance puppy food made for the breed (NB always feed large/giant breed puppy food to those breeds) is essential. Explain that the puppies still needs a full set of vaccinations (generally 6, 9, 12 and 16 weeks of age) and they need to be dewormed accordingly.