Hyperadrenocorticism, or Cushing’s Disease, is a condition whereby the level of cortisol in the body is too high.  It is a condition which is also found in humans and the name Cushing’s Disease or also commonly known as Cushing’s Syndrome comes from Harvey Cushing, who in 1912, was one of the first physicians to report a patient affected with excessive cortisol hormone also otherwise known as glucocorticoid.

Cortisol is a hormone that is present normally in the body and it usually increases to a small degree in response to stressors such as illness, environmental changes or fear.  Some people call it the “fight or flight” hormone. Cortisol is a catalyst for different events to occur, such as the release of cells which fight infection and a release of sugar from the muscles in case the animal needs to utilise these stores.  Cortisol helps the animal to cope with stressors and is necessary for normal function.  Its production is closely regulated by the body’s physiological processes, so that the animal can respond as needed and remain in balance with its environment.

The pharmaceutical industry has managed to produce drugs which are almost identical to the cortisol which is produced by the body naturally. The use of these drugs is very common, because patients respond so well to their positive effects. However as with everything in life, – too much of a good thing, is not a good thing anymore. Administration of these medications can actually lead to Cushing’s syndrome as well. This is known as an exogenous cause. We will not concentrate on this type of cause on this article but rather on the internal or endogenous cause of Cushing’s disease. Cushing’s disease is a disease that occurs fairly commonly in dogs but rarely in cats.  Female dogs are slightly more predisposed than males, and it usually occurs in animals older than six years of age.  It is seen most frequently in Poodles, Dachshunds, German Shepherds and terriers of different kinds.

Cushing’s Disease is a complex syndrome with a large range of symptoms.  To fully understand it, one must first understand the normal physiology of the animal.  In every dog and cat there is a series of events that occurs to produce cortisol.  One can imagine a factory line within the body, and it starts with an area in the brain called the hypothalamus.  This region of the brain produces neuro hormones which go to the next site in the line, the pituitary gland.  The pituitary gland is a tiny gland sitting at the base of the brain which has an amazing influence on many of the body’s normal functions or homeostasis. The pituitary gland is stimulated to produce another hormone which goes to the adrenal glands which are situated very close to the kidneys. The adrenals are the final stage of the factory line and they produce cortisol.  A problem can occur at any of the points along the line.   Unlike at a factory, the cells do not go on strike and stop working.  Usually the problem is that the cells overwork (for example if a tumour is formed) and so too much of the hormone produced at that site is released.   (Wouldn’t it be nice if this occurred on an industrial level?!)  The area that overworks increases the production of hormones further down the line.  It also decreases the hormones produced before it due to negative feedback (the manager of the factory phones to tell the workers to take a break, enough is being produced!)

The main signs of Cushing’s disease include an increase in appetite (polyphagia), as well as an increase in water consumption (polydipsia) and urination (polyuria).  Another common sign is an enlarged abdomen, giving the animal a potbellied appearance. 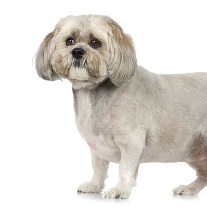 This is due to weakening of the abdominal muscles and the deposition of fat in this area, as well as an increase in size of the liver internally.  Cushingoid animals often have a symmetrical hair loss over the body and the skin can become quite dry and thin.  Other signs include lethargy, acne, weakness and a tendency to bruise easily.  Bitches can fail to cycle normally, and males may show a reduction in size of the testes.

Roughly speaking about 70% of tumours occur at the pituitary gland, and only about 30% at one of the adrenal glands.  It is important to establish where the tumour has occurred as it affects prognosis and treatment.  This can be done with a series of blood tests and also ultrasound scanning (the tumours cannot however always be seen).  The main tests performed are the Dexamethasone Suppression Test and the ACTH Stimulation Test.  These tests mimic the hormones produced by the body to assess which parts of the factory line are implicated.  Prognosis for pituitary-dependent Cushings is usually good, and for the adrenal-dependent form more guarded.

For both types of Cushings the treatment is lifelong oral medication, but it tends to be more effective in pituitary-dependent Cushings.  There are mainly two types of drugs being used to treat Cushing’s disease. The one drug acts by destroying the cells of the adrenal gland so that production of cortisol is reduced, thereby "taking workers out of the production line".  Once these cells have been destroyed they are gone forever, thus requiring cortisol replacement in the form of tablets, if too much of the adrenal glands are destroyed. The other drug acts by competing for the building block enzymes which are needed by the cells of the adrenal glands to produce cortisol thereby "reducing supplies of raw materials needed for manufacturing, resulting in less output". This drug tends to have less side effects but can be quite significantly more expensive. The choice of which drugs to use will depend on the condition of the animal, how advanced the state of the disease is and cost of medication.  Side effects  of medication may include vomiting, diarrhoea, lethargy weakness and loss of coordination.  Treatment for adrenal-dependent Cushings can also involve surgical removal of the cancerous gland.  There is a risk that the adrenal gland tumour will spread to other parts of the body before surgery takes place, which would markedly worsen prognosis. It is important to note that if the route of oral medication is chosen that it is considered chemotherapy similar to cancer treatment. The medication should be handled with care and preferably with latex gloves, because some of the medication may be absorbed through human skin and will have the same effect in humans as in animal that it will destroy the cells of the adrenal gland.

In certain cases patients who are diagnosed with Cushings are not very ill and if this is the case then the vet may decide that treatment can be optional.  However, some animals suffer more than others and all animals with Cushings are at an increased risk for developing Diabetes and bacterial infections.  When treatment is commenced it is important that the patient visits the vet frequently in the beginning to assess how effective the dosage is at controlling the syndrome. Over-medication can have serious side effects because of the destruction of the cells of the adrenal glands.   Medication may need to be adjusted over time to for the animal to cope optimally. Long term treatment may be expensive depending on the size of the dog.

The prognosis for Cushing’s disease when treated is good, especially if the tumour is of the most common type.  The average survival time for a dog after diagnosis is about two years.  This may not sound impressive but is important to note that most dogs are already middle aged or older at the time of diagnosis.

As with the diagnosis of any serious lifelong condition in a pet, the owner must think about what he or she is prepared to commit to, in terms of costs and administration of medication.  Choices like these are highly personal and there are no “one size fits all” options for treatment with this condition.  The treatment of Cushing’s disease is however, usually very effective and rewarding.  Like a factory, if management is consistent and prepared to tweak points along the line, then production will be efficient and correct. In cases like these the factory will perform at optimal levels and the patient may continue to live a normal and happy life.